Meet the women behind the masterpieces at the IFWTO marketplace.

Meet the women behind the masterpieces at the IFWTO marketplace.

The Trade & Consumer Marketplace attracted dozens of Indigenous artists, crafters, and entrepreneurs, who brought with them their best work to the delight of the crowds at Indigenous Fashion Week Toronto. Harbourfront Centre’s Ann Tindal Park was brimming with vendor booths selling art, apparel, and accessories; many traditional, and many with a contemporary twist.

Jennifer Younger is a Tlingit artist who travelled all the way from Sitka, Alaska to sell her copper and silver jewelry at IFWTO. She got into the art of carving metal 6 years ago, at the suggestion of her sister, and has been doing it ever since. “Once I started, I fell in love with it. If I could do it 24/7 I would,” she says. 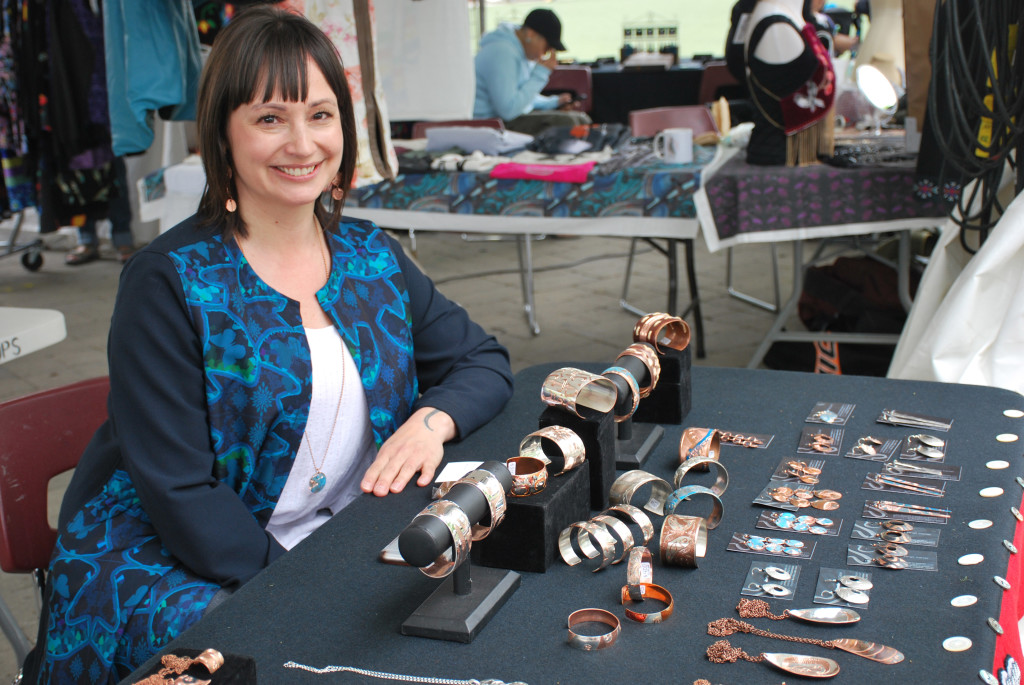 Younger has been fortunate enough to be able to make a living off a traditional craft. “The Tlingit have been carvers forever, with woodwork, the totems, but even metal is referred to as carving, rather than engraving. I would say metal was introduced when there were shipwrecks off the coast. The Native people would go out and salvage it, and bend the copper into a neck piece, or a bracelet. And then the engraving came along around the late 1800s, early 1900s.”

Her work is more contemporary than other carvers, and she uses a lot of monogrammed ovoids, like this cuff bracelet, which takes about one day to make. “I do everything by hand, I do use a pneumatic engraver, so there’s a little bit of help there,” she says. But as far as bending metal, she does it all by hand. She also hand files the edges of smaller items like earrings and pendants, but uses a grinder on some of the bigger pieces.

Martha Kyak is an Inuk artist from Pond Inlet, Nunavut, but she’s been teaching in Ottawa at Nunavut Sivuniksavut for the past 8 years. Some of her best-selling and most beautiful pieces are her long fringe sealskin necklaces. 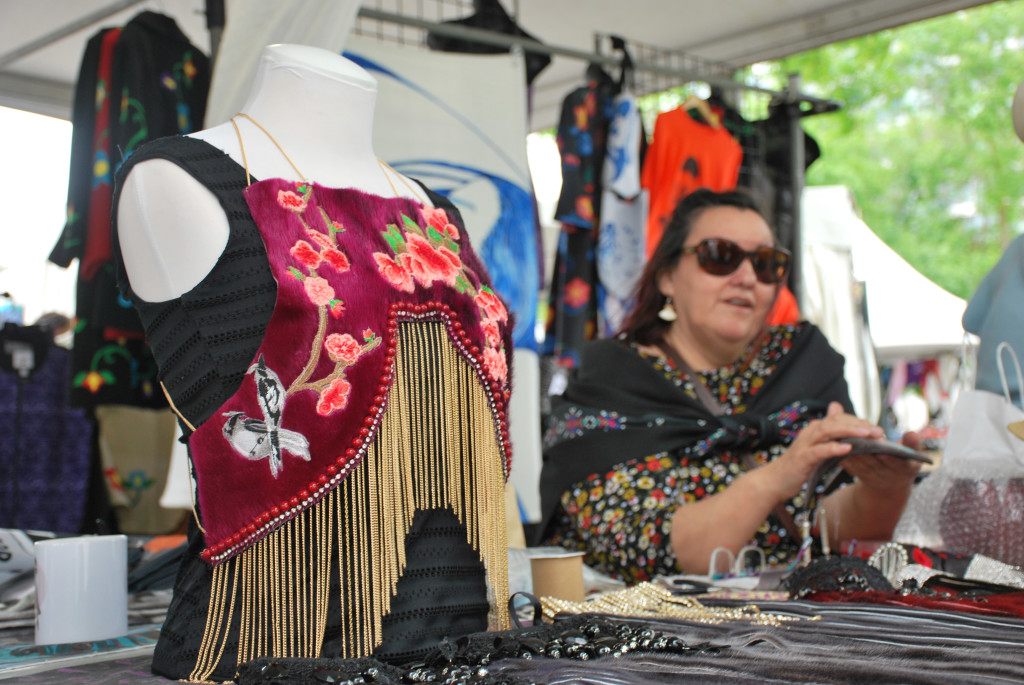 The idea for these fringed creations came about by accident when Kyak was doing a photo shoot with her students. “One dress had fringe around the collar, but it was a very small size, you know fitted for a model, and some of the students couldn’t fit it. So I cut the collar off and used it as a necklace, and I thought they could wear this with anything,” she says. “It’s quite glamorous, yet you can wear it casually too.”

This sealskin ‘sakiaguti’ is another popular neckpiece she designs. “When Inuit women made their amauti (parka in which women could carry their babies), in front there’s a design with this shape. From that inspiration I made it into a necklace, and you can wear it anytime, over anything.”
When Kyak lived up north, she’d sew parkas for her three children, which is typical in Nunavut because there aren’t many warm parkas available to buy. Her floral parka with black fur trim is inspired by 1920s fashion. The black, white, and red parka is inspired by the 1960s and has a retro look, but she made it her own. Kyak also makes shorter sealskin parkas as well as blazer-like jackets, to incorporate pieces that succeed in a more sporty, business casual look.

Tammy Beauvais is a Mohawk designer from the community of Kahnawake. Beauvais considers herself a fashion entrepreneur, and has been designing clothing for the past twenty years. ‘My style is more professional wear. I design with the professional Indigenous person in mind,” says Beauvais. 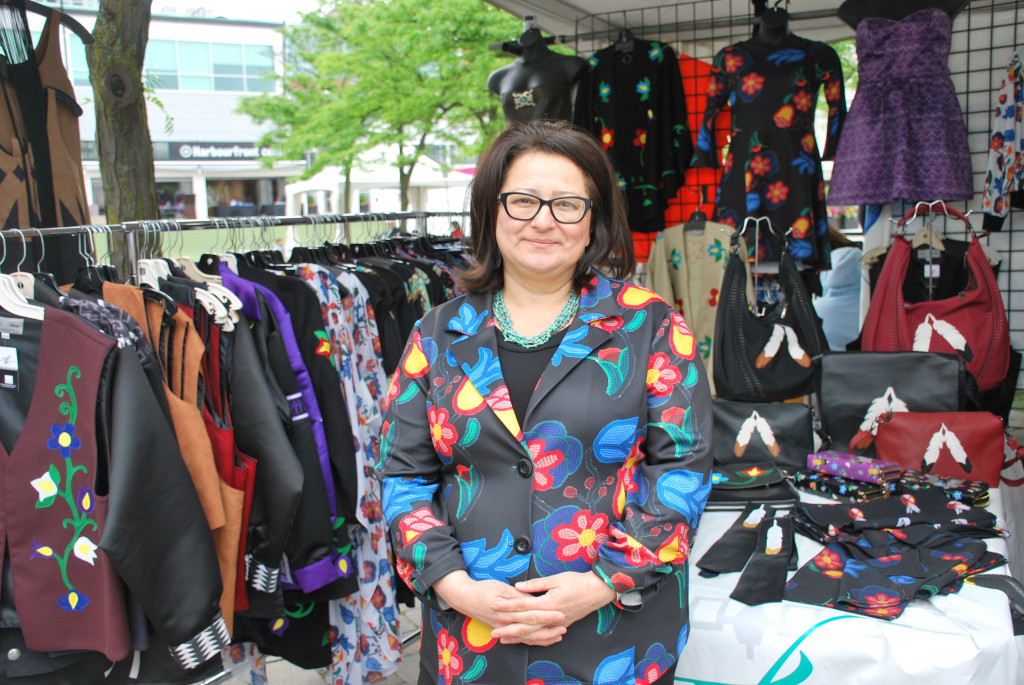 Some of her best-sellers include ties for men, and capes for women. “Men are willing to take a risk on a tie, because it’s an easy thing to wear, whether you’re Indigenous or non-Indigenous. And when you get to the cultural appropriation issue, the non-Indigenous men say they feel uncomfortable wearing authentic indigenous clothing because they’re no sure if it’s okay, but a tie is comfortable for them.”

“Capes I’ve been doing right from beginning,” Beauvais says. “The first ladies of North, South, and Central America have my capes. Michelle Obama has one, Sophie Gregoire Trudeau has one. And it’s exciting for my customers to know that.”

As for IFWTO, Beauvais says she’d like to keep the momentum going. “I don’t want it to stop. I hope they have it every year. It’s important because we’re getting the exposure, we need to open it up to the mainstream.”