A question we get from non-Indigenous friends who are excited about the Otahpiaaki project is, “where can I buy this?”…often followed by, “Can I buy this? Am I allowed?” or some other equally awkward question.

All designers involved in the project have a unique voice but all of them want us to buy their amazing clothes and accessories, and to promote their brands! This may not be the case for all Indigenous designers but Otahpiaaki has focused on a central idea from the TRC Calls to Action --- that the work of reconciliation is for neighbours.

In a nutshell, cultural appropriation is the adoption and misuse of design elements from another culture without the consent of people who belong to that culture. In the fashion context, at its worst, it is done unapologetically by designers, is harmful culturally and economically, and is typically a violation of the collective intellectual property rights of the originating culture.

Although awareness of appropriation is on the rise, consumers still don’t understand in many cases what the problem is, or don’t realize they have done something wrong until they have been called out on it. I have always supported local artists and their work so when I got the opportunity to purchase an amazing jacket from Indigenous designer Justin Louis (Section 35), I grabbed it as soon as I could. It is a camouflage jacket with a re-crafted giant Chicago Blackhawks skull logo on the back saying “Kill the Mascots, Save the People”. 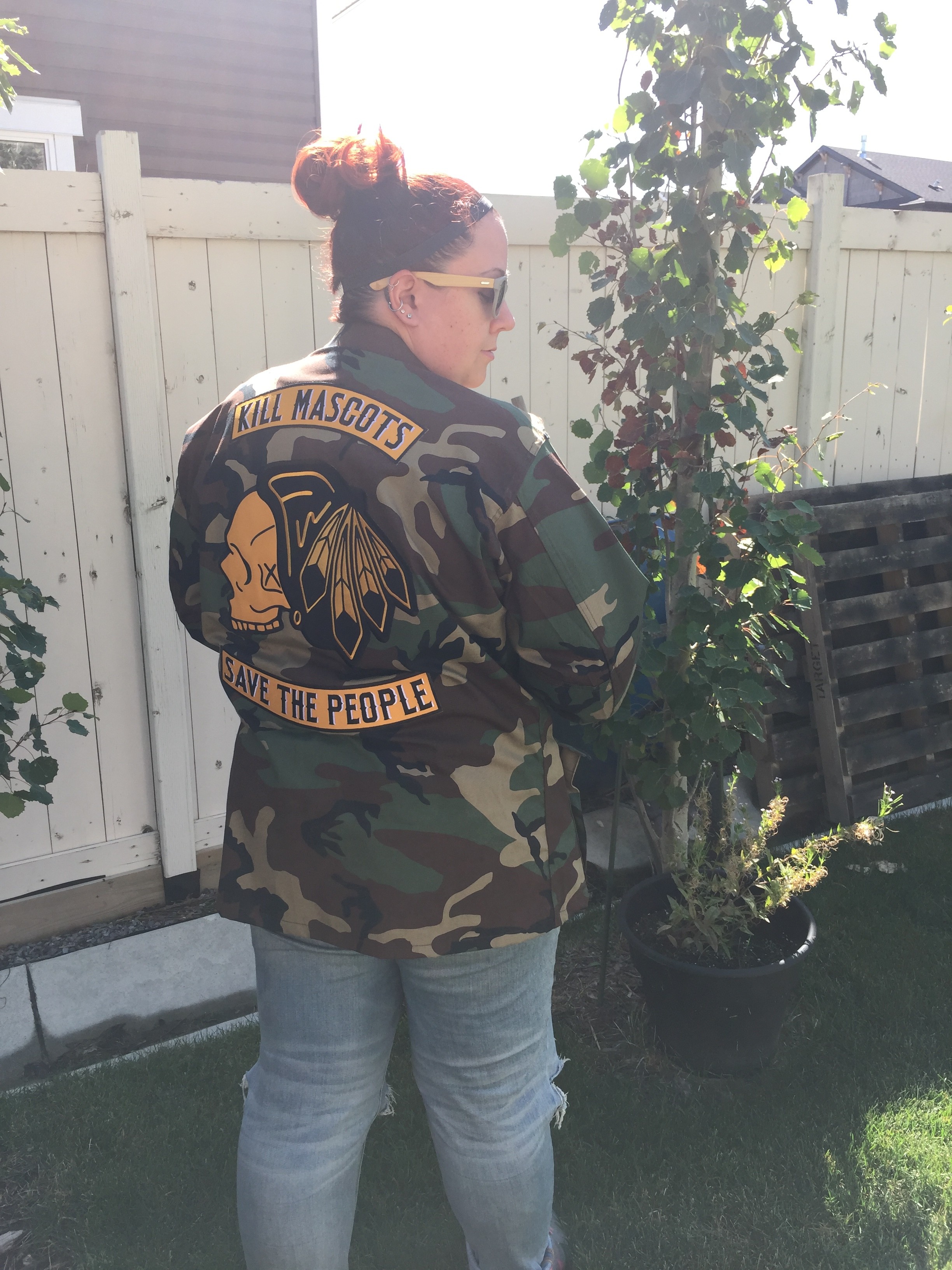 When I decided to wear it for the first time I didn’t think anything of it. I believe in Section 35’s vision and I really think the jacket has a lot to say about the appropriation of iconic Indigenous imagery in sport, and why that remains problematic today.  I appreciate his work and I want to stand against appropriation injustices. Unfortunately, not everyone shared my perspective. I had people staring at me, I had people saying that I shouldn't be wearing the jacket, and I had people telling me to take it off. So it seemed like everyone believed that I was doing something wrong. I knew I did nothing wrong, so why did everyone think so?

I think there is a fine line that people should know about in wearing Indigenous designs and apparel. And, from my perspective, there’s a commitment to being the wearer of these designs.

Appreciating can include supporting a local Indigenous designers work by wearing it, knowing the message behind the piece, having an opinion or point of view yourself, and being able to tell people what it is all about – this is a type of fashion activism. A couple key questions;

1) Where did I purchase this?

2) What resonates with me about this piece? On a deeper level what do I appreciate?

4) What Nation is the designer from?

5) What is the designer saying with this piece?

Know for a fact that the piece came from an Indigenous artist that you are wanting to support.

There is no place for really crass forms of appropriation (-- Sacred headdresses at music festivals, Pocahontas Halloween Costumes, etc.). Those are racist decisions and banning and eliminating participation based on racism and stereotypes, I’m 100% behind.

The opportunity to educate about usually comes in more subtle forms. Big box stores often and without thought appropriate Indigenous design constantly. In a world of fast fashion, lots of consumers perpetuate the problem by buying cheap, inexpensive knock-offs (--in some cases prestigious designers appropriate, fully knowledgeable that they are doing so).

This fash-activism can also occur friend-to-friend and by sharing why you understand appropriation to be, why you believe you think you might be looking at something exploitative, and by talking about this new wave of Indigenous designers and their achievements. Asking questions will help them figure out if they are still comfortable wearing that piece.

The next time you purchase something, if you are unsure, do some research, look into origins, learn about the designer, and see if it fits your activisms. Appreciation requires surprisingly little extra effort but gets Indigenous artists the recognition they deserve, and allows us all to participate in economic reconciliation with this emerging group of designers.