We've  tracked down up and coming DJ BLKFT in Vancouver during a summer of work, steez, and pop-up fashion events on the coast.

For those new to EDM as genre, here are a few fun facts:
-Electronic Dance Music’s (EDM) 30-year, once-underground sound can be traced to the early ‘80s Chicago house music movement pioneered by the late DJ Frankie Knuckles along with the development of Detroit techno.
-EDM evolved from disco which played records for audiences rather than emphasizing the art of mixing tracks. The phenomenon of ‘storm raves’ migrated from the UK to the US, Mexico and Canada and the scene started blowing up with the advent of the Internet. The birth of the EDM festival movement followed.
-Steez = Style with ease. Originally from the song Shadowboxin by GZA and Method Man.
-HQ for one of the most celebrated EDM production companies, PK Sound, is based right here in Calgary. PK is sought after for their sound technology inventions including their Trinity 3D Wavefront Control. PK is on deck as the sound producer for all Otahpiaaki 2017 showcases.

Now onto our interview...

BLKFT, we’re really excited you’re on the Youth Showcase Friday September 22nd down beneath the Chief David Crowchild Memorial in the Atrium at the City of Calgary. You follow the youth fashion showcase and precede DJ KZK as part of the EDM Event. How did you find Otahpiaaki?
I heard about the show last year, I didn’t know it was called Otahpiaaki, but lots of people were talking about it and now it’s all over social media. So, I decided to reach out and see if I could contribute.
Tell us more about your EDM signature. If I walked into a dark room and was listening, how would I know it was you?
Ha! Well I tend to weave together upbeat, happy dance music. I resonate with deep house, future house, tech house, and #rezhouse – a bit of a joke with a friend. I’m influenced by and admire Disclosure, Small Town DJs, and Kaytranada. I really believe the beauty of the EDM community promotes an inclusive experience, when people come with an open mind and heart, they can feel it for themselves.

We talk a lot about deep beauty at Otahpiaaki – beauty that is intellectual, cultural, spiritual, physical… we find it in design and fashion, music and community, family and new experiences.
Oh that deep beauty happens with EDM. There is a connection that EDM artists craft, a connection between the audience and the music. That connection is found in the little things, like noticing how audiences respond to the music and interact with one another.
Is it too much to believe that reconciliation can be found in music and EDM experiences?
I discovered my love for music when I was 13 years old after I picked up a guitar. Since then I’ve dabbled in everything from drums and synthesizers to DJ equipment. In 2014, my best friend Racey BigSnake who is also a local DJ (Blackfoot Boy) bought a controller (the Traktor Kontrol S4) and the rest was history. Over that time I’ve learned a lot about patience, and the value of learning, putting in the time, and being motivated to grow as an artist and a person. 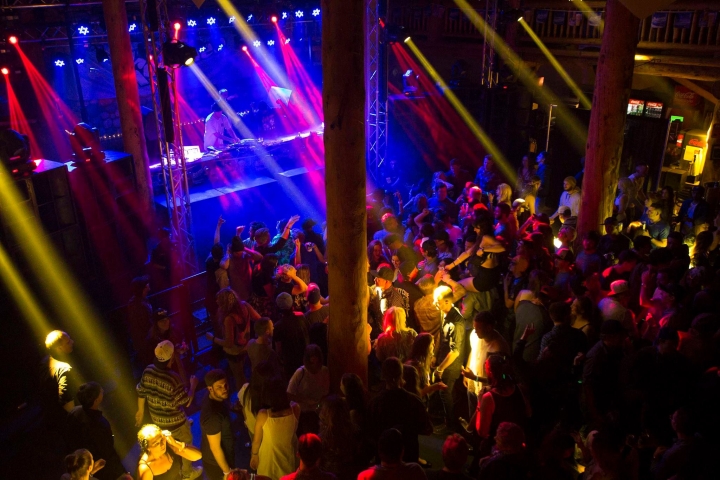 EDM is about unity. Music has no skin colour, it doesn’t discriminate, it doesn’t worry if your beliefs are the same as my beliefs. Music brings us together and helps us find connection. So I think, I hope, and I wish that we’ll have a great show and believe that there are lots of ways during the week to find ways to reconcile. Until then, I’d invite everyone to check out my feature on What Will the Neighbours Think, recorded in April 2017 on CJSW 90.9 FM with Kendra Scanlon.