Who We Were, Who We Are: Episode 3

The Artist and The Buffalo Hunter

Healing on the Land

The Voices of our Ancestors

The bridges we build with global communities form a solidarity that goes far beyond strength in numbers.

The bridges we build with global communities form a solidarity that goes far beyond strength in numbers.

The practice of making art is also one of building a community; both of people and of ideas.

Growing up and spending my early adulthood in Winnipeg while surrounded by many respected knowledge keepers, I was introduced to the idea behind the Anishinabe word ikaanaaginaa. Ikaanaaginaa translates to something like “we are all related”. This word is most often used at the end of prayers and speeches. For me, it is much more than perfunctory; I feel the concepts it embodies are absolutely central to the Anishinabe and other Indigenous peoples’ sense of the world and our relationship to it.

I spent a lot of time pondering the idea of everything being connected and in relationship with each other; and after much reflection, this concept became the core of my own belief system. 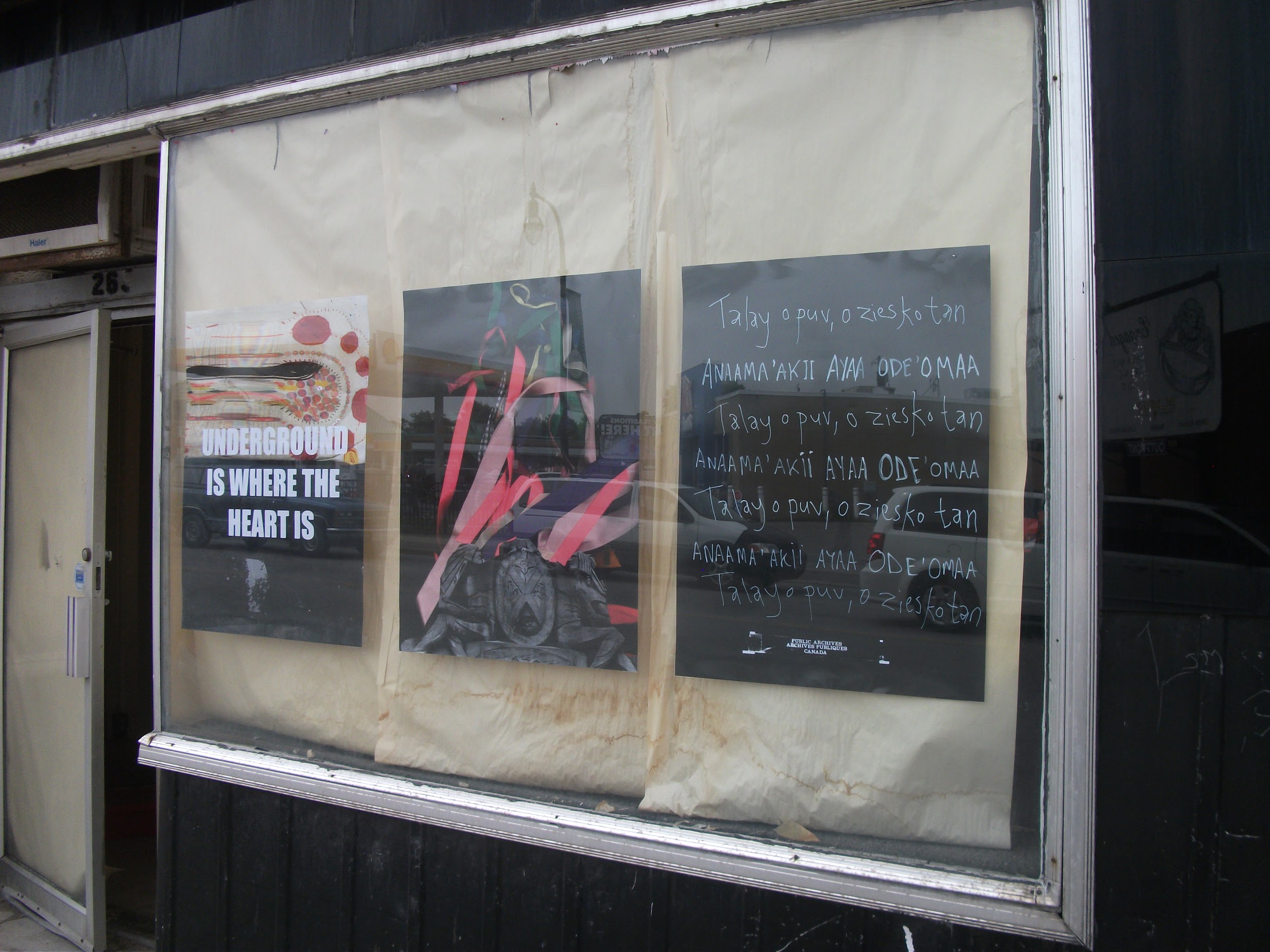 This is a recent collaborative work between myself and Roma-Traveller artist Delaine Le Bas. This was a poster series developed in Owen Sound, Ontario. The premise of the work was to address both political and social concerns about the languages and the land that nation states reside upon. The other posters in the series incorporate both Anishinabemowin and Roma languages, both at one time outlawed and both still endangered in their own homelands and territories.

I think that we visual artists, and really all those wanting to create meaningful and insightful work (for ourselves and our communities) must strive for a fundamental, authentic understanding of ourselves- where our beliefs stand, where they developed and how they inform and shape our worldviews.

Before devoting myself to art-making as a primary vocation, I worked extensively with Winnipeg’s Indigenous community- both in education and community development. From that work, the importance and urgency of seeking new ways to understand and promote our communities’ inherent sovereignty was impressed upon me. From this, I learned strategies and ways of collectively strengthening our individual, communities’ and nations’ causes via collaboration and relationship building. 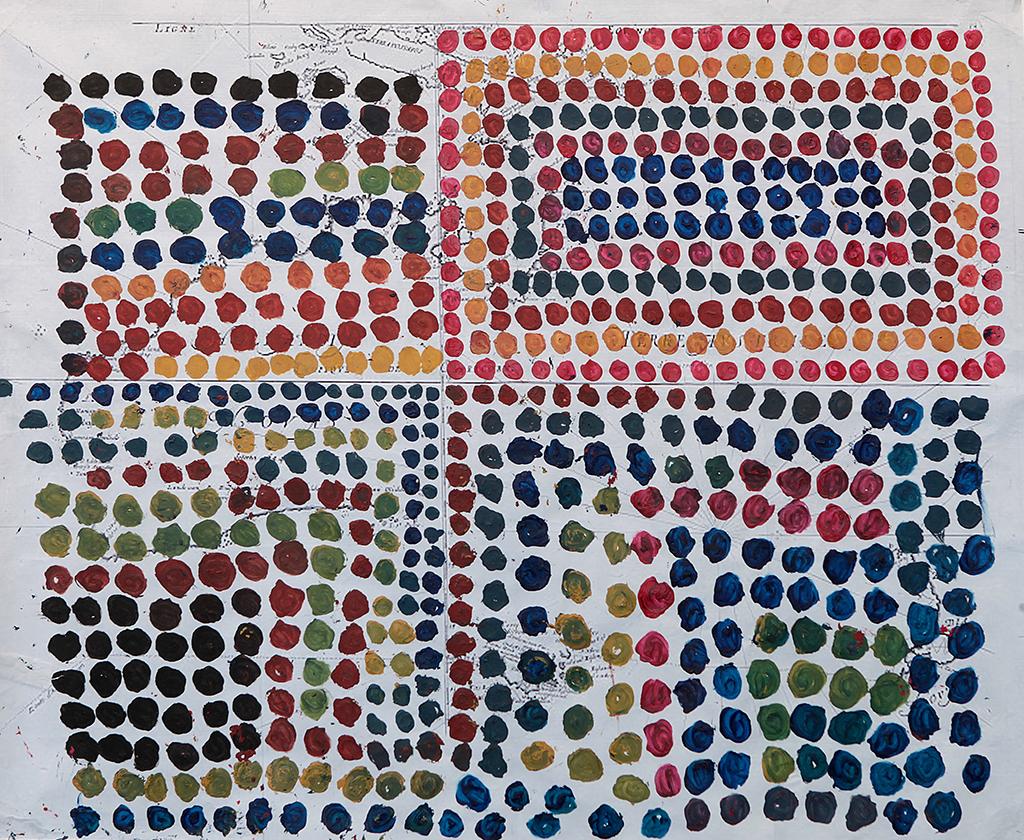 This work was created as a reference to the globalization of Indigenous imagery and how nation states use their First People’s art when selling their ‘image’ globally. This was created using bingo dabbers- a comical, stereotypic First Nations past-time, and acrylic paintings in dots,-an easily identified Australian art style. Together, these were employed to mask and reclaim one of the earliest maps from Dutch explorers off the coast of Australia.

For me, this strengthening process began with looking outside of local neighbourhoods and communities, immediate cultural groups and nations. It meant exploring globally situated communities that share historical and contemporary similarities, if not shared languages or cultural ties.

A common reaction I have encountered when discussing this idea of “looking-outward” is: “There are so many people and issues right here in our own community. Why do you need to look outside? Why help someone else before your own community?”

My answer is yes, this is true. There are many issues close to home that urgently need help and energy. Luckily (and I say this with immense pride), there are so many talented people already devoted to and working hard on those issues.

I see a solution to our individual challenges as a multi-pronged approach that thrives on the incredible diversity of interests and talents that make up our communities. Some individuals want to build strength close to home; others are called to leave to foster farther reaching relationships. It really does take all kinds for our communities to thrive and for our shared struggles to be strengthened In my mind, this collaboration embodies Ikaanaaginaa and speaks both about personal and interpersonal connections, small relationships and large ones, local and international.

This work was based on the concepts of solidarity among smaller movements and global communities struggling with various colonial oppressions. A flag was created as a personal representation of Anishinabe solidarity with Derry’s continuing struggle for sovereignty from Britain.The flag was based on the wording of the treaties, and on the relationship to the land inherent in our worldviews.

My personal response to Ikaanaaginaa meant taking on research residencies and projects in Northern Ireland, where I have created ongoing work with a Roma-Traveller artist. It has also involved visiting, collaborating and working with Indigenous Black communities in Western Australia.

Each one of these projects was based on the idea that small communities, all of whom have faced shared colonial legacies and continue to deal with the contemporary impacts, have much to offer each other in terms of solidarity and support. Sharing stories and knowledge has always been a core element for Anishinabe community building. Considering the globalization of our worlds, the technology available to foster those connections, and the pressing need to look beyond the immediate, the use of art as a cross-cultural vehicle to communicate ikaanaaginaa is a perfect fit for me.

Our communities face such great challenges and are so small numerically in relation to the mainstream nation-state that it only makes sense to build strength using a global, expanded approach. There is much power in the pressure brought to bear on governments when it comes from external focus and criticism. When like-minded communities act in solidarity, that pressure can be multiplied and manifested in ways not available in acting alone.

Scott is an Anishinabe intermedia artist who works primarily in photography, printmaking and video. His most recent work has been centered on cultural crisis/conflict and its political manifestations, as they are located and contextualized around issues of Indigeniety from a global perspective. Website