Since his youth, Andy Everson has tried to follow in the footsteps of his Kwakwa̱ka̱'wakw relatives. His work creates bold and unique artistic representations that remain rooted in the age-old traditions of his ancestors. Andy’s pieces explore and express his ancestral artwork in a number of contemporary ways, the most prominent being his fascinating style of juxtaposing Star Wars visual pop culture with Northwest Coast Indigenous art aesthetics. 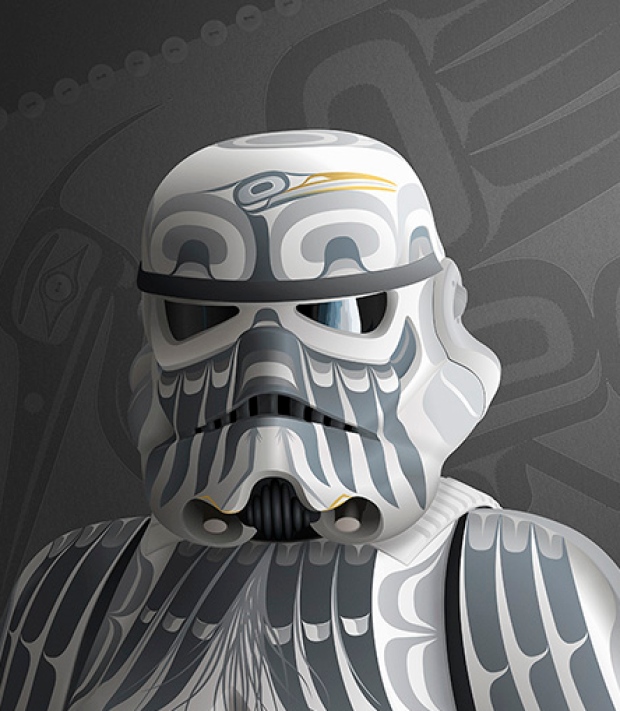 Andy’s provocative Indigenous interpretations of iconic Star Wars characters has allowed him to fuse these two personal passions in fascinating ways. His love of the Star Wars series collides beautifully with his obligation as an Indigenous artist, in ways he feels brings new life to these traditional forms of art.

These contemporary interpretations of pop culture references also have significant political undercurrents, as is seen in the unlikely juxtaposition of Darth Vader, a distinctively imperialist figure, with Indigenous aesthetics. 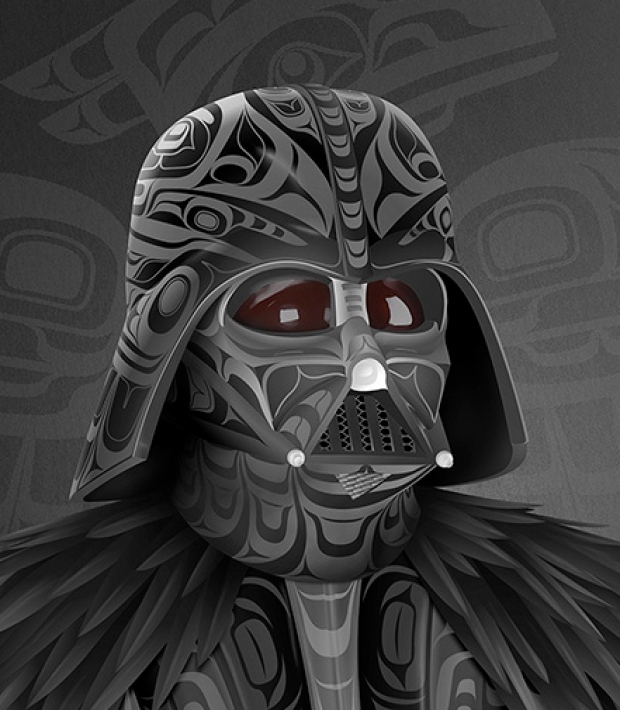 His work also plays off of both Star Wars themes and Indigenous legend, as is seen in his provocative piece “Northern Warrior”, in which Andy presents a stunning interpretation of a Stormtrooper helmet, whose design features traditional Chilkat weaving colors of yellow, blue, black and white, and that is fashioned with a maple wood hat worn by Andy’s ancestors. 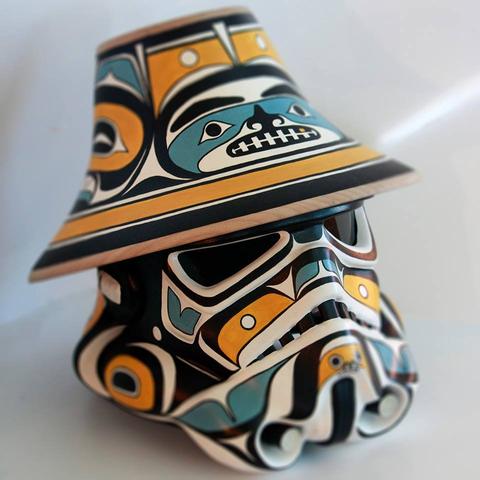 Andy describes this breathtaking piece in the following artist’s statement:
“Many of my Tlingit forefathers were warriors. When preparing for battle many of them would don slatted armour suits and hard wooden helmets carved with their crest imagery. Whether facing off against other First Nations or even Russians with firearms, they entered battle wearing their ancestral lineage and ancestral pride. The hat on this helmet displays the Kwakwaka’wakw crest of the sisiyutł—the double-headed serpent. This symbol of the warrior reminds us of the dichotomies in life—good and evil, right and wrong—and puts a human face in the middle to teach us that we must choose where we stand.”

This piece, along with his other work, is rich with cultural meaning, and creates a compellingly symbolic and iconic aesthetic that is hard to look away from.